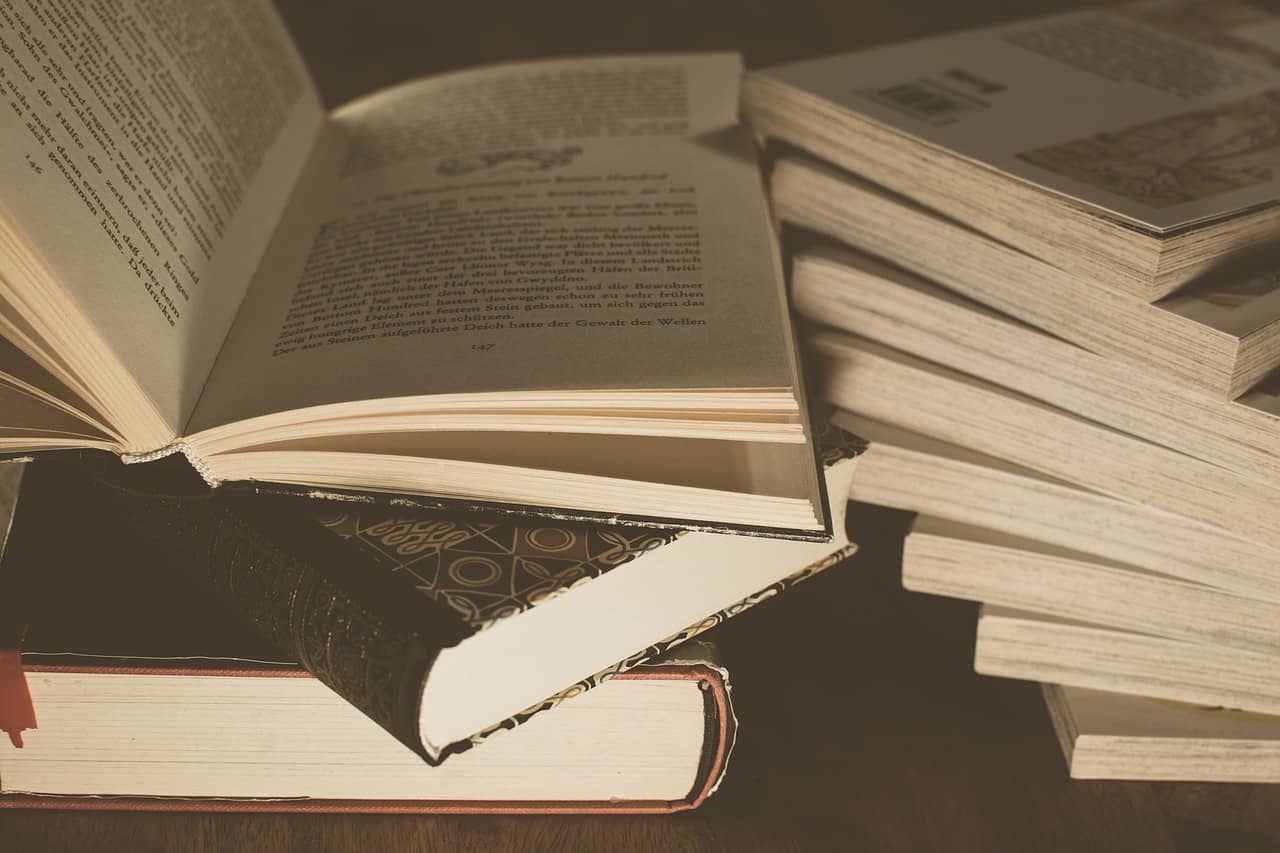 The internet is filled with articles and videos with titles like „How I learned 6 languages in one year”, „Become fluent in 2 weeks”, or „I learned a language fluently while I was sleeping”. Unfortunately, I can’t tell you such a story. I’ve been interested in Japanese culture and language since forever and I studied it by myself before I majored in Japanese. However, it took me a while to become fluent and confident.

I would say I was a beginner when I was a freshman, and I got to a strong N2 level in two years. Of course, it depends on you as well. How much time you spend on studying, how easy it is for you to memorize words and phrases, and most importantly: by when do you need to get to a certain level? If you’re in a rush I would recommend a really intensive studying schedule, but if you have two or even more years you can definitely take it easy.

In this article we will provide some tips and methods that make learning Japanese easier and at the end we will show you a diagram on how you’re should schedule your time. Let’s jump right into it!

Integrate studying into your free time

It’s true not only to Japanese, but we all learn the language of our favourite TV show, singer or author easier. Who wouldn’t learn ancient Greek to read Homer in the original version? No, but seriously, it’s a very efficient way of learning to integrate studying into the activities you enjoy. Listening to Japanese music, watching Japanese movies and TV shows, reading manga, it’s all fun isn’t it? Furthermore, you don’t have to memorize all the unrealistic and weird examples a textbook provides, but you can learn through real-life situations. Now you just have to make a movie list, grab some popcorn and start your intensive course!

If you know the Japanese writing system you know it consists of hiragana, katakana (chart below) and kanji, but they all have their own function, so you have to use all of them in your sentences. Katakana is used for foreign words, hiragana is for grammatical and function words, suffixes, and some native words. Kanji are the Chinese characters and they build up the vocabulary of the language.

The last one is the nightmare of most beginners (and even some advanced level learners) but in reality you don’t have to be afraid of it. Actually, kanjis are made of so called radicals which all have their own meanings. Sometimes you don’t even have to know the word or how to read it but you can already guess the meaning. A really common example is the word: 森 (forest) 木 means tree. So what does a bunch of trees mean? Forest, right? You don’t have to learn all the kanji from 0, you only have to learn the radicals. Here are some examples for them:

Another example to understand how radicals work: here’s the word 宿 that means inn. If you look at the radicals you can guess the meaning; hundred people under the same roof. 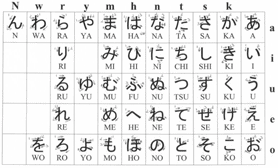 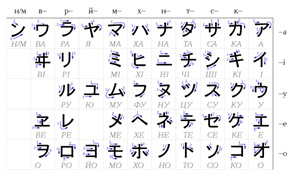 Calligraphy – at least at home

Calligraphy might be a surprising tip and you might take it as the first category since it’s also a free-time activity, but the point is it’s a fun way to learn Japanese characters. A real calligraphy set might be a little too pricey, but you can always grab an exercise book and write down each kanji 300 times while you’re listening to a podcast. Okay, 300 times might be too much, but the more you write down a character the easier it is to memorize. Your hands get used to writing it and you’ll remember because of the practice.

I know it’s scary to use a foreign language. You might be afraid of making mistakes, you’re shy and can’t even make a sound, but after you step out of your comfort-zone you realize how fun it is to talk with Japanese people. It’s okay to make mistakes, no one will judge you. If you make Japanese friends, they can even correct those mistakes. If I remember how shy I was in the beginning and how much I learned just by making Japanese friends, I’m so happy I could spare all those boring hours over a textbook. Practice makes perfect, and nothing is better than to have a conversation with native speakers. Even now I make mistakes all the time and some of them are really embarrassing, but as a good motto says “better done than perfect”. Just relax; you’re with your friends, not in the classroom. And if you make a mistake you can always laugh it off and memorize the correct form.

How long does it take?

As I said earlier, everyone is different and each of us has their own pace. However, I created a diagram to illustrate how many hours you should spend on studying in average. You might already know that the most popular and common language exam is JLPT (Japanese Language Proficiency Test) that consists of 5 levels, each marked with an N letter and a number. N5 is the beginner level and N1 is the native level. But since we’re talking about fluency and confident communication let’s focus on the N2 level which is already enough to communicate with Japanese people smoothly, and most companies are satisfied with this level as well. It’s close to English C1 level, however they are hard to compare.

If you’re a complete beginner you might want to aim for N4 or N3 at first and if you’ve passed them you can move on to the N2 level. But let’s say you’ve already succeeded and you’re preparing for the N2 exam. This level requires approximately 1000-1200 kanji. There’s no official kanji list for the JLPT so nobody knows exactly which kanji can appear in the exam.

The thing is you have to know not only the way a kanji is written but all the pronunciations and the words the kanji appears in as well. That being said, it takes time to learn even just a single one. If you’re a beginner I’d say you can learn 4 kanji in an hour. N5 level kanji are quite easy such as 一、二、三、日 or 人. They are the most basic ones. If you spend one hour for 4 kanji it’d take 155 hours to learn the 620 N3 level characters. If you’re already on advanced level you can raise the amount and learn 5-6 kanji an hour. I think someone who prepares for N2 after successfully taking the N3 exam can learn 6 kanji in one hour, so you’d spend 67 hours to learn only the N2 level ones. The time can vary depending on your studying pace, how much time you have in one day and how motivated you are. All the 1000 kanji would take 167 hours to learn. However, I warn you kanji have different difficulty levels. The kanji mentioned above can be learnt easily, but how about this one: 劇. Not to mention these kanji that look really similar but are completely different: 績, 積, 精, 清, 晴. I know, it looks horrible. But don’t worry, remember what I told you about the radicals.

The grammar has no official list either so let’s say there are 40 forms on N5, 50 on N4, 90 on N3 and 120 on N2 level which means you have to know about 300 grammar forms in total for the N2 level exam. N5 level grammar forms can be very easy like the “to be” verb (が いる、が ある) but N2 grammars are very difficult sometimes. Even some Japanese friends can’t explain them to me since they use them unconsciously. The verb かぎる is a good example, since かぎり、かぎって、かぎらず、かぎらない mean totally different things. If you understand the grammar forms quickly you can learn 6-7 in one hour. Which means you can learn the 300 N2 level grammar forms in 37 hours from zero knowledge. If you learn only the N2 level ones you can finish them in 15 hours. 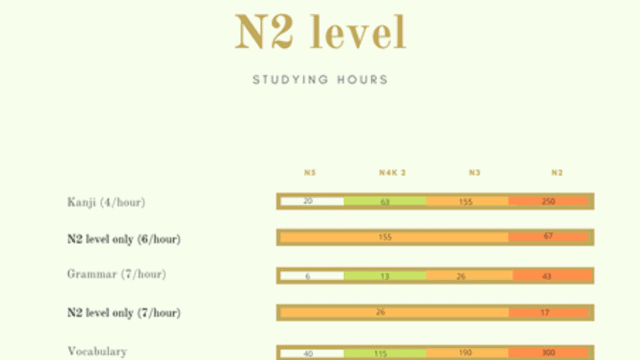 The numbers I gave you are relative. If you learn 6 hours a day you can reach N2 level within a year even if you’d never studied Japanese before. If you’re busy or it’s more difficult for you to learn a new language it might take more time. It’s really up to you, what your goal is, how much time you have to spare etc. But at the end of the day the most important thing is to enjoy your studying. No pressure, you’re not the first one to deal with this language, so you can always ask for advice. We hope this article helped you to schedule your studying time and the tips we provided were useful. Good luck! 頑張ってください！

Japanese studying tips
ABOUT ME

What Jobs Can You Get as a Foreigner...